How To Build a Container Home Step By Step 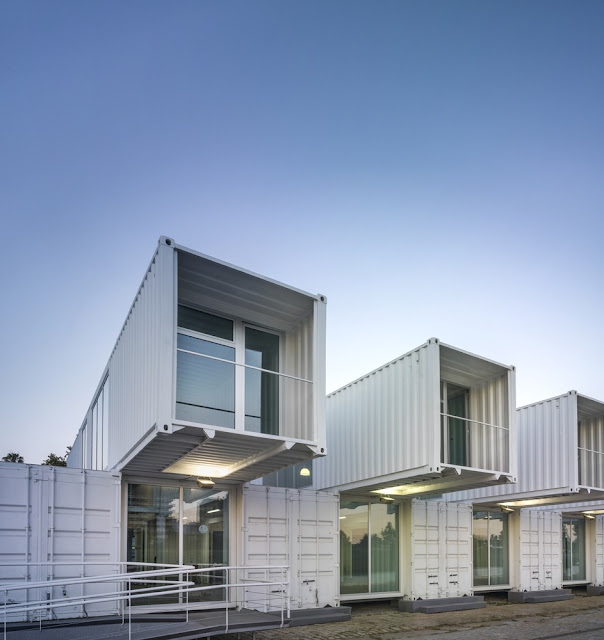 The Port of Seville required a new Cruise Terminal with a flexible, multipurpose, expandable, easily removable and even removable character. This would allow it to adapt to the difficulty of forecasting the volume of passengers in the port and would not limit the possibilities of the valuable urban-port space of the Muelle de las Delicias. It was proposed to solve the project through maritime containers. On the other hand, the place, next to the old town, demanded an object of architectural quality that promoted dialogue between the port and its urban environment.

On-site work could only last 15 days, the maximum time between two consecutive cruise ships docking. The modular construction with recycled shipping containers would allow for work in the workshop, would ensure precision on site, and would ensure compliance with execution deadlines.

The sustainable design of the terminal takes advantage of the constructive and plastic possibilities of the reused containers, adapting them to a specific environment and climate. The heat of the sun in Seville on the sheet metal envelope could turn the terminal into an oven. Bioclimatic strategies are, therefore, essential.

Separate “high cube” containers are arranged in parallel, and standard containers are placed over the space between them, the floor of which is cut and lowered to the height of the previous ones. Thanks to this, double heights are obtained that relieve the space and allow the hot air to be placed at the top by stratification. The openings according to the prevailing winds of the upper containers allow cross ventilation that removes this heat accumulated in the upper part. The exterior white paint allows the reflection of up to 90 percent of the solar radiation and its special composition with ceramic microspheres avoids its excessive heating.

In order to achieve the large open hall that was needed despite the limitation in width of the containers, this space was designed transversely to them. The maximum possible gaps are opened in the side plate, but without compromising its structural stability both in its final phase and during its transport, assembly and disassembly.

The upper containers act as skylights. The lights and shadows generated, as well as the structural metal studs, make it possible to differentiate internally the different juxtaposed spaces of the containers, recalling, on a smaller scale, the succession of the traditional port ships. As the upper containers are separated from each other and project in flight towards the river, they are clearly recognized individually and receive the passenger arriving by boat.

The lower floor, more massive, is depressed with respect to the height of the city. Separate skylights allow you to see both banks through them. Up close they clearly show its nature as a shipping container. From the other bank, Los Remedios, make up a low plinth-shaped plinth that does not compete with the regionalist architecture behind it. The doors that are removed from the upper containers are used inside; the original floors are also used, once treated, as finished pavement. The finishes do not attempt to hide the industrial details that allow the container to be recognized, giving the space an unmistakable personality.

According to the locator plates of each of the 23 reused containers, it has covered 1,150,000 km. This equals three times the journey from earth to the moon or 29 times around the world.

While the terminal is not being used by the port, it is rented to be used as an exhibition hall, as an event hall, or even as a concert space.

Buró4 together with Male Stone Architects have built the port of Seville maritime station to service large passenger cruises. For this, the reuse of maritime containers has been chosen, providing a contemporary architecture that offers a building of great utility and spatial qualification, based on criteria of sustainability, flexibility and capacity for growth. Teamwork has been carried out from the bureau4 and Hombre de Piedra, with the collaboration of Tercera Piel Arquitectura and Construcciones Cabello, so a project and work service has been offered where the entire process has been addressed as a single highly complex problem that It has allowed a high control of design, terms and costs. The comprehensive management has made it possible to carry out the project and the work, turnkey, in just 2 months. The port of Seville needed a new multipurpose cruise terminal with a flexible nature that could adapt to the unpredictable number of passengers who could use it on a regular basis. On-site construction should have the ability to be extensible, mobile, having to solve its construction in 15 days, just in the space between two consecutive cruises.

The location in the port, but near the historic center, was demanding an object of architectural quality that would dialogue with its urban environment. The modular construction with recycled shipping containers was mostly carried out in the workshop, ensuring with the precision of on-site work the guarantee of completing the works on time.

The sustainable design of the terminal takes advantage of the constructive potential and plasticity of the reused containers, adapting them to a specific environment and climate. The heat of the sun in Seville on the metal envelope could turn the terminal into an oven. For them, bioclimatic strategies have therefore been essential. 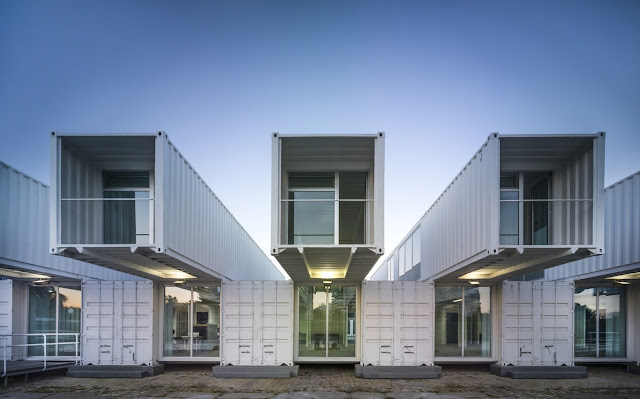 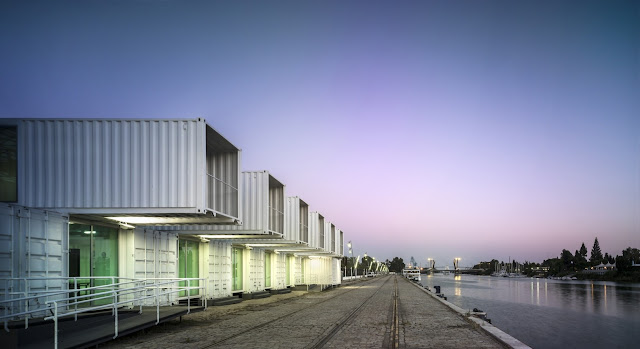 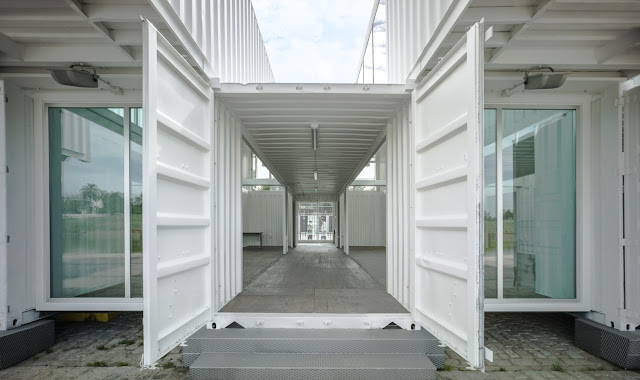 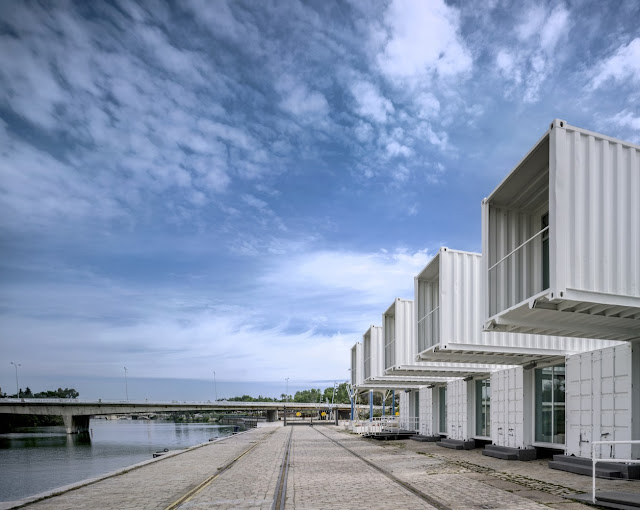 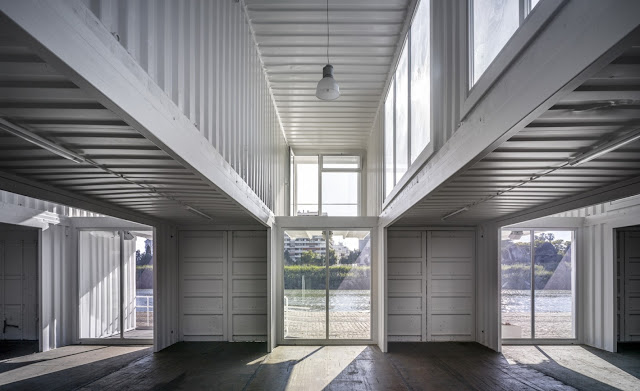 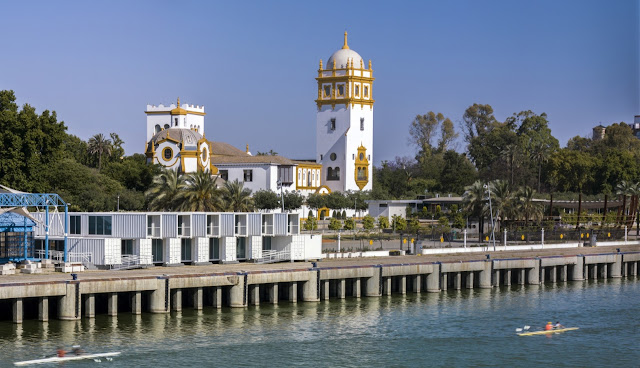 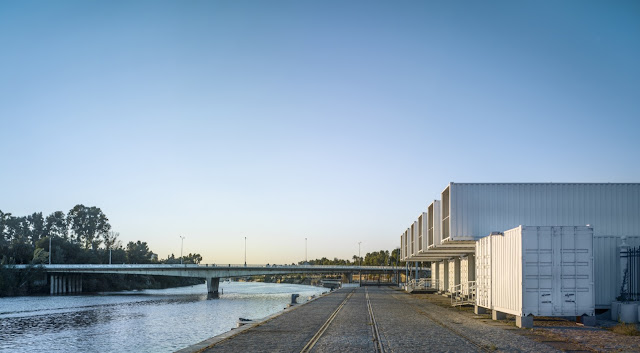 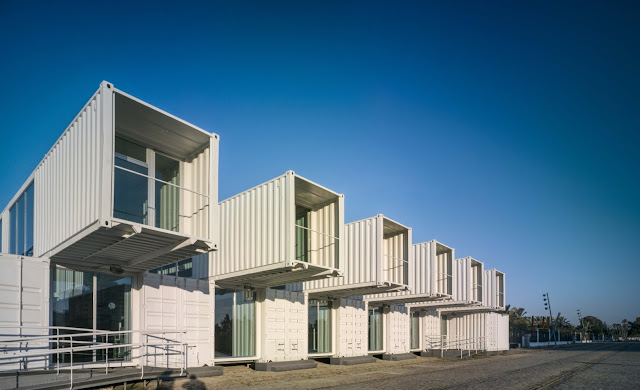 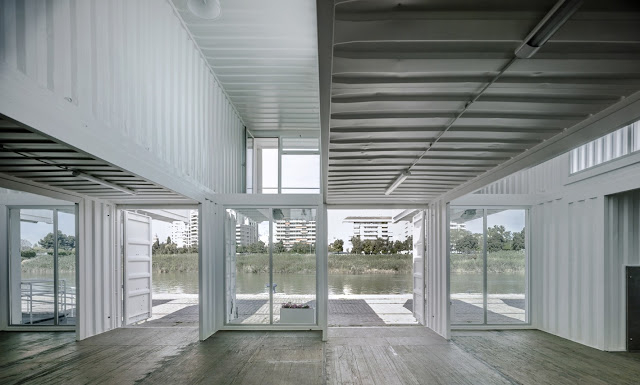 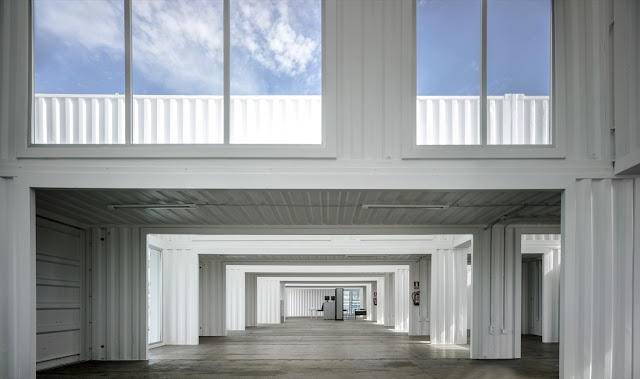 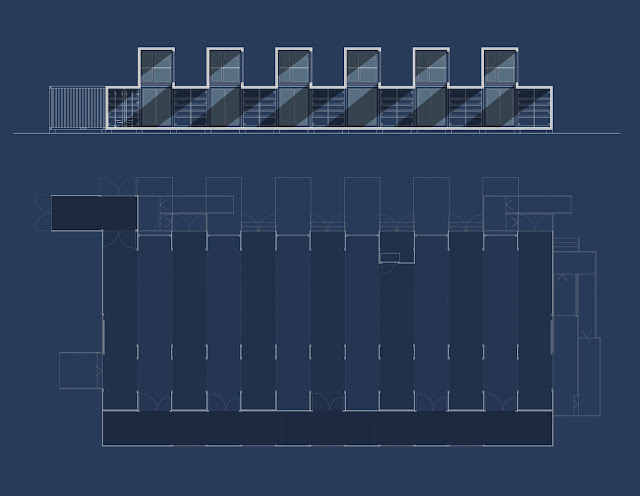 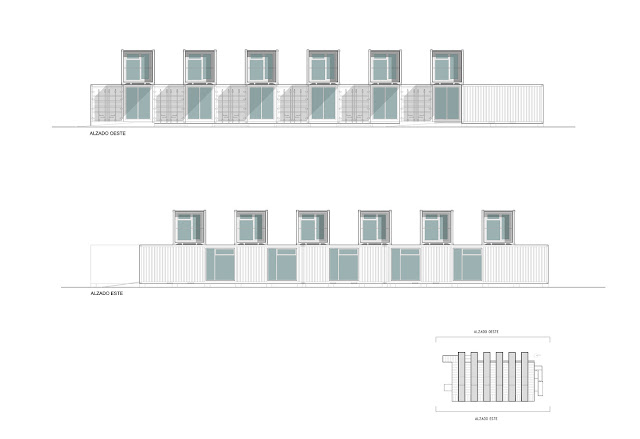 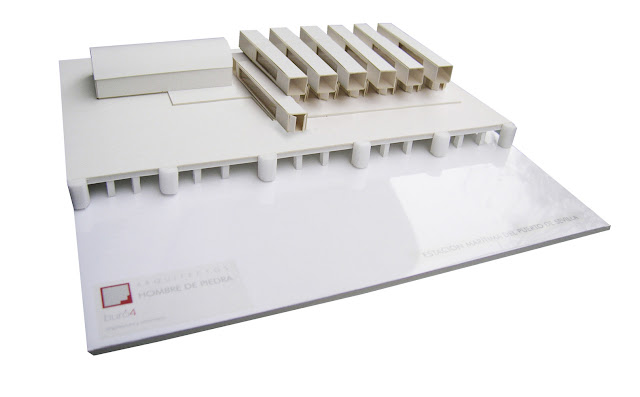 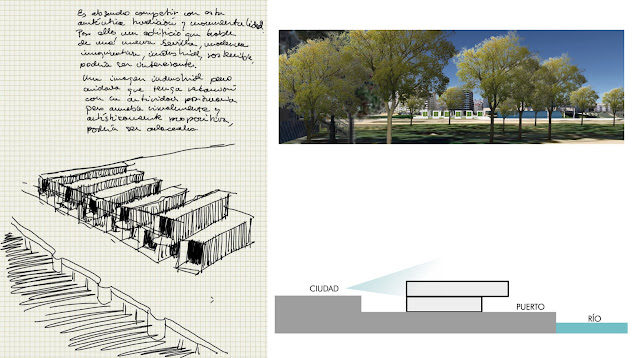 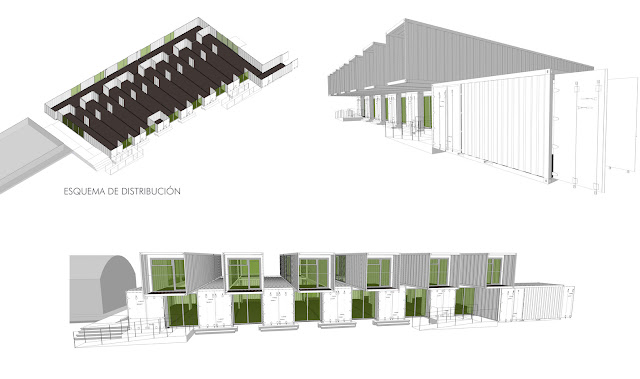 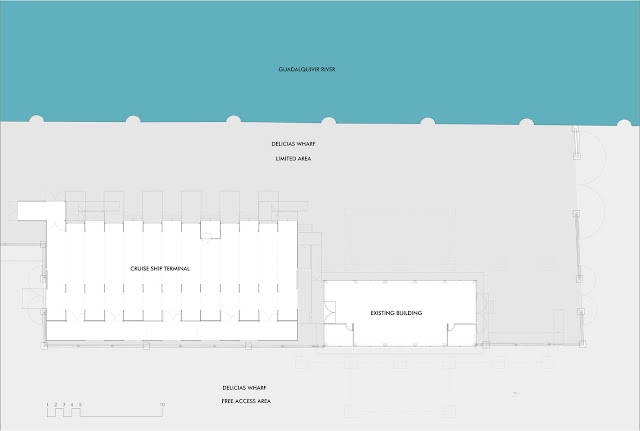 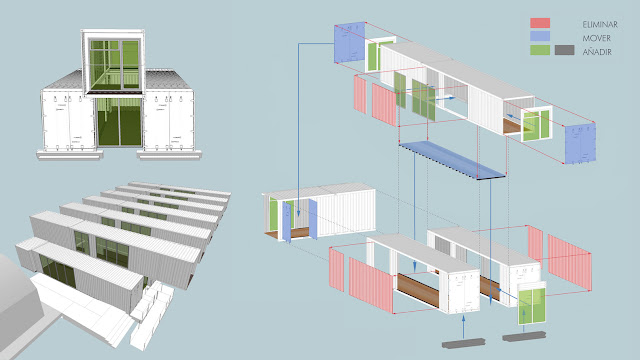 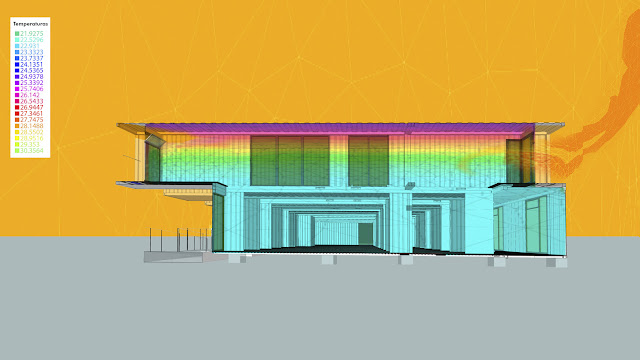 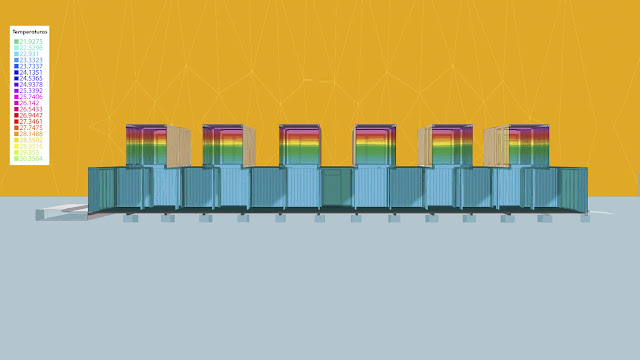 Since the company was founded, bureau4 has intervened in the territory and in urban reality with the capacity to cover the complete cycle of a project; from the definition of objectives, planning and management, to the construction of the architectural object. The company, in turn, has the capacity to work in specific areas of urban planning, urbanization, architectural and environmental prevention processes.

Buró4 is characterized by carrying out the control of the entire process from the prior analysis, design of strategies, negotiations and documentary production, to the follow-up and support of the administrative procedure, to conclude with all the steps and work necessary until the completion of the objectives. the client’s.

The differentiating element of bureau4 is the ability to lead teams of specialists, bringing together the direction and management that coordinates and generates a unique dialogue from the idea to the execution of the project.

For this we have a network of complementary companies, forming a cohesive and proven “collaborative networking”. Teamwork is our difference.

The experience acquired in the full cycle processes prepares us to preventively detect problems inherent in any process, in such a way that it allows us to offer comprehensive solutions that make projects viable and develop them in coherent terms, guaranteeing their technical quality and economic and environmental ustainability.

Buró4 carries out its main activity throughout the national scope. He also has proven experience in South America, both in municipal and territorial planning, as well as in architectural and environmental work, mainly in Panama and Colombia. Together with its national and international Partners, it covers countries such as Honduras, Uruguay, Mexico, Argentina, Venezuela, as well as countries in Eastern Europe.

Our architectural practice was founded in 2001 by Juan Manuel Rojas and Laura Domínguez, partners and cofounders.

Hombre de Piedra is a patron of the Contemporary Architecture Foundation.

There are many adjectives related to our practice that we are very proud to hold, such as: sustainable, bioclimatic, efficient, ecological, environmental, green, eco-friendly, biological, eco and environmentally friendly.

We think this condition should be present in any kind of architecture. Architecture is looking into the future. We imagine buildings and cities that are not yet built. As in science fiction (not the apocalyptic one), we like to imagine a better future. To preserve our future, we must be very careful with what we build and how we do it.

From the very beginning, our practice stood out for this particular aspect of our work: sustainability. But the truth is that the difference between the traditional approach and ours is that we include this from the concept design. We start thinking of the sustainability aspects from the very first sketches. It is the way to truly integrate them into the architecture of the building (or planning or any other design).
The conventional approach studies the efficiency of the building in a later part of the process, when the installations are being designed and calculated.

We intend to think of the installations from the very beginning. We do not leave its design to another department. We use to think of installations as spaces themselves, and of spaces as installations.
We also think of other important aspects of sustainability such us: spatial flexibility, industrial and rational processes, recycling, reuse of materials and spaces, modular architecture, use integration and compatibility and movable architectures. Architecture is a way of ordering space, and space is another limited resource on Earth. Sustainability has to manage the best use of limited resources.

Man has developed technology since the first tools made of wood and stone. Now our technology is much more complicated. For us, people, technology is as natural as breathing, despite the confrontation between technology and nature.

Technology can sometimes be hostile, uncomfortable or nonsensical. But let’s not think of technology as a bad agent. We do not need no technology, but better technology.
We believe technology is the natural human way to relate with the environment. We cannot do but technology, because it is what defines us as humans. There is nothing more natural than technology, and nothing more human than machine.

Agriculture is technology, tradition is technology, a nice courtyard of a mediterranean house is technology. Art is a curious variety of technology. There is game in all technology, because there are no solutions without creativity. The technology that improves our environment is architecture.
But to idealise technology is as vain as to reject it. Technology is not magic. It is based in science, and this in rationality. It cannot make the resources grow unlimitedly in a limited world such as ours. The paradox is that only technology can help us solve the problems that an unsophisticated technology has caused our planet.

About the Author: admin

I've made this site to gather the best information on building with shipping containers. If you have any useful info that you would like to be shared, get in touch today!